Concrete houses form an inextricable part of architecture, the world over

Creeping inexorably forward from the suburban backyard, the garage has come to dominate the homefront. ARM Architecture has, unsurprisingly, gone a step further. Champions of suburbia's idiosyncrasies and featurist eccentricities, ARM brings the garage into the heart of co-director Ian McDougall's Elwood home. 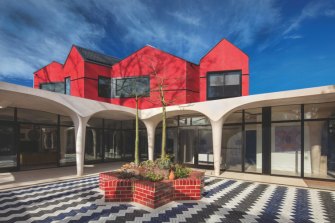 Blooming within McDougall's home are a dozen of the garage's delicate lily pad columns, reconceived in white concrete and supporting a thin concrete slab ceiling. This being an ARM building its references are multiple. It borrows equally from the writing of 19th-century German architect Gottfried Semper, whose back-to-basics approach accords with lessons ARM learnt designing the Shrine of Remembrance undercroft and courtyards.

"Working underneath the Shrine you got a sense of being protected, like the vaults under a cathedral," says McDougall.

What's striking about McDougall's home is the ability to feel cosseted despite concrete's customary reputation for Brutalist bulk. Its delicate columns are a counterpoint to what he calls the "masculine bravado" of many concrete houses. 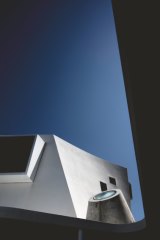 The Elwood house features in Concrete Houses, a new book by Joe Rollo, a former Age architecture critic. While there is plenty of muscle flexing in this international selection of 19 projects (11 Australian), Rollo's aim is to capture the "power, grace and poetry of each featured building". The Poetics of Form is the book's subtitle.

"Concrete offers the possibility of unlimited exploration of structure and shape," Rollo writes in clear and accessible prose.

Beauty abounds in these sculpted forms. The thin, tapered wings of Peter Stutchbury's stunning Blue Mountains eyrie and Chrofi's Byron Bay Lune de Sang offer striking examples of modernist pavilions with low-profile planes, blades and cantilevers sheltering open flowing spaces. But the level of gymnastic difficulty rises along with the walls on the institutionally scaled Villa Alem in Portugal, whose high, tilted slabs appear to fold open like flaps on a box.

The book revels in concrete's dynamism: its monumental mass yet paradoxical plasticity. The exterior of Indigo Slam by Smart Design Studio in Chippendale, Sydney uses arcs of concrete that peel and fold, "like paper cut-outs in a pop-up book", Rollo writes. The skylights on Durbach Block Jaggers' Tamarama house resemble concrete eyepieces: a telescope looking out or a microscope looking in? Meanwhile, there's a playfulness in casting concrete like a child's drawing of a gabled house in the Swedish Summerhouse or the Dovecote treehouse in Portugal (which features on the book's cover). 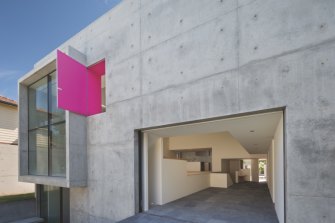 Why choose concrete? Clearly it's a material designed to make a statement. "It's precise, modern and abstract," explains John Choi of Chrofi architects.

Another drawcard is its material tactility. "Good concrete you just want to touch," says McDougall. "Concrete can sometimes be quite cold looking and mausoleum like. We tried to make it not like that. Brightonlite white concrete gives it warmth."

Maintaining the sculptural textures of the formwork also adds warmth and emphasises the handmade quality of the concrete. Typically the texture is achieved by the grain of the wooden boards, but ARM used fibreglass moulds. These created a seam on each side of the pillars that they retained. By contrast to achieve the "near flawless curves and planes" of the Indigo Slam façade took a year to make and place the plywood formwork. 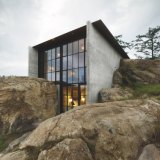 The Pierre by Tom Kundig, on Lopez island off the US northwest coast.CREDIT:DWIGHT ESCHLIMAN

Whether austere or sculpturally patterned by formwork, what's also striking about these projects is concrete's ability to bring out the beauty in its internal details – timber joinery, steel and stonework –and external backdrops.

The most dramatic impression is the immediate juxtaposition of building and landscape. On Lopez island off the US north-west coast, Tom Kundig's The Pierre is robust enough to withstand being inserted bunker-like into rock. In the jungles of Brazil and Byron Bay, the concrete pavilions are set amongst lush green landscapes. It's not hard to appreciate equally the eye-catching foreground architecture and stunning background.

"[Concrete's] rawness and immediacy provides a good compositional frame for the richness of other materials," says McDougall, whose elegant white concrete columns are a counterpoint to the bold Moorish-inspired courtyard.

The brief for Indigo Slam was a building to last a 100 years, Rollo writes. Longevity and recyclability are certainly on concrete's side environmentally. It's been used for thousands of years. The second most consumed material on the planet after water, concrete is produced almost everywhere. This means lower transport miles. It also has good thermal performance.

"In summer it takes a long time for it to heat up," explains McDougall. "In winter, with a relatively small amount of heating, it retains the heat."

On the downside, concrete production generates high CO² emissions. Given concrete's advantages it's no surprise a less environmentally harmful version is actively sought. After all, poetry should not be a guilty pleasure.

Earlier this year a collection of Rollo's columns from this publication and elsewhere was published. The title piece of Harry Seidler's Umbrella concerned the arrogance and generosity of the architect. The same might be said of these concrete houses. Many seem uncompromising. More than once Rollo wonders what the neighbours might think. Yet in the flesh, the author tells us, these concrete buildings, like Seidler himself, are generous, sometimes playful and surprisingly warm.

Concrete Houses: The Poetics of Form by Joe Rollo, published by Thames and Hudson, RRP $75