A new exhibit explores the engineer, architect, and contractor who turned everyday material into spectacular shapes 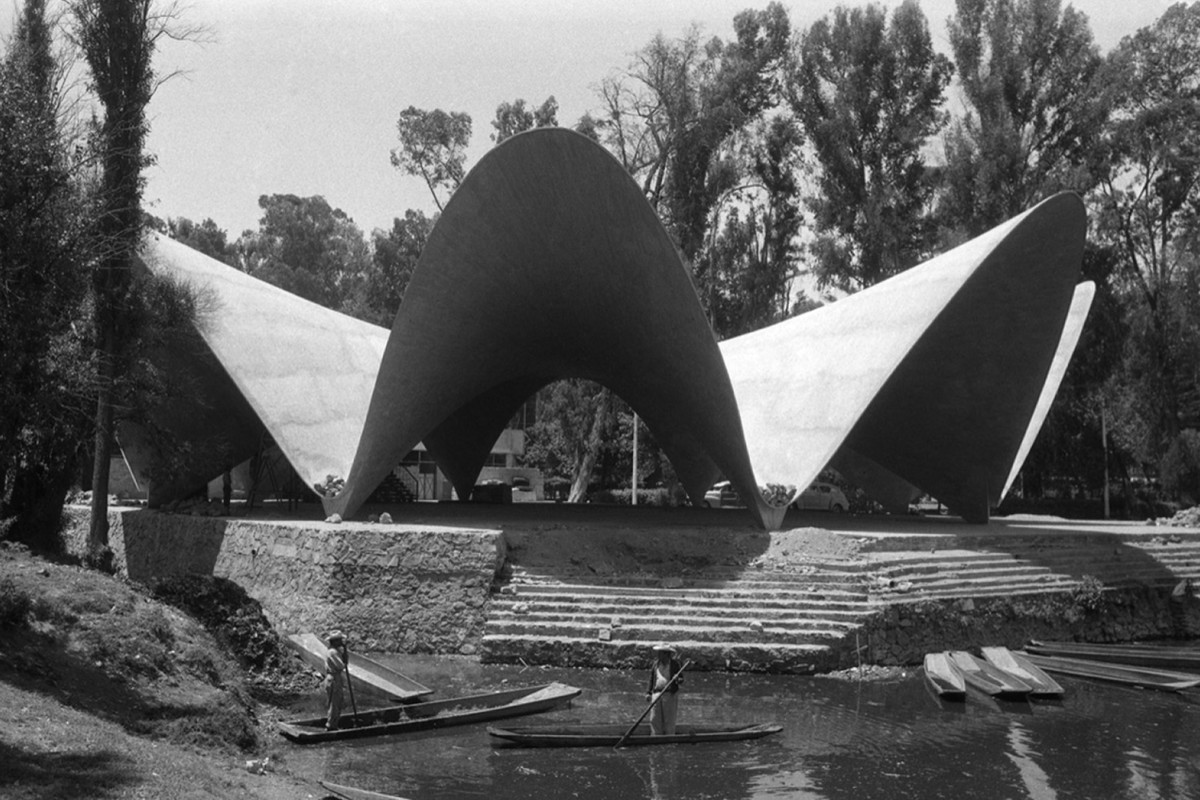 During the earthquake that struck central Mexico last September, the ground buckled, hills shook, and buildings collapsed. In the aftermath, the Mexico City authorities authorized a census of historic buildings to find out what had been damaged or destroyed.

Close to the epicenter of the quake in Xochimilco, a neighborhood near waterways where residents would spend lazy Sundays floating on wooden boats called “trajineras,” one structure with walls just an inch-and-a-half thick managed to survive the calamity. Nicknamed “La Flor,” Los Manantiales restaurant, a thin, concrete-shelled structure designed to resemble a floating lotus flower, escaped the disaster with just a few bruises and bends.

This daring concrete design was the work of Felix Candela, a Spanish-born architect, engineer, and contractor who helped revolutionize the use of concrete in the 20th century. His embrace of thin, curvy shells for structural design, which he called cascarones, were declared “daring structural fantasies” by famed critic Ada Louise Huxtable. 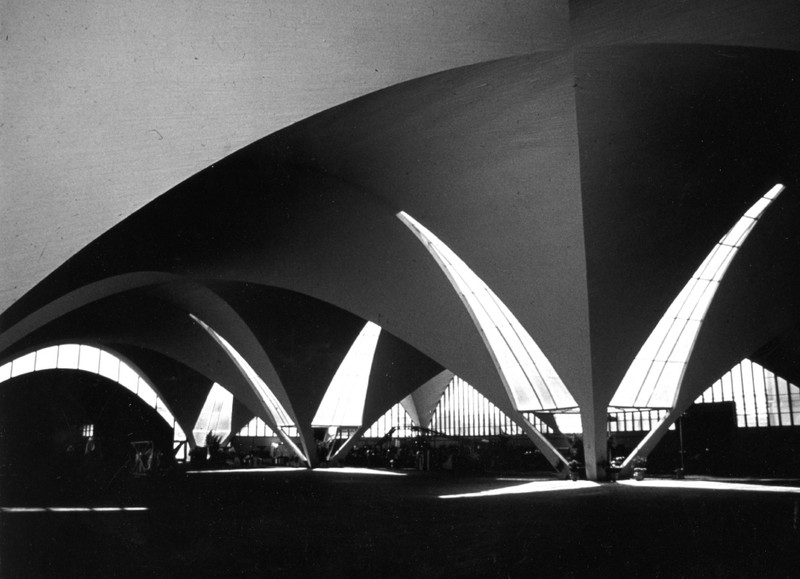 The interior of Los Mananatiales

Candela’s career, including the hundreds of structures he designed in Mexico as well as a decade spent teaching in the United States, are the subject of a new exhibition, “Felix Candela’s Concrete Shells: An Engineered Architecture for Mexico and Chicago.” A collection of photos, interviews, and models on display through March 3 at Gallery 400 at the University of Illinois at Chicago, where he taught from 1971 to 1978, showcases the genius of his concrete geometry, and his lasting impact on structural engineering and architecture. Both Zaha Hadid and Santiago Calatrava, a former student, namecheck his work as an inspiration.

Creations such as the 1958 Chapel Lomas de Cuernavaca, a glorious swoop of masonry, took advantage of hyperbolic paraboloid geometries and his own design daring. These seemingly pancake-thin marvels of masonry were also possible in part because of his business practices, according to architect and UIC professor Alexander Eisenschmidt, who organized the show alongside Juan Ignacio del Cueto. 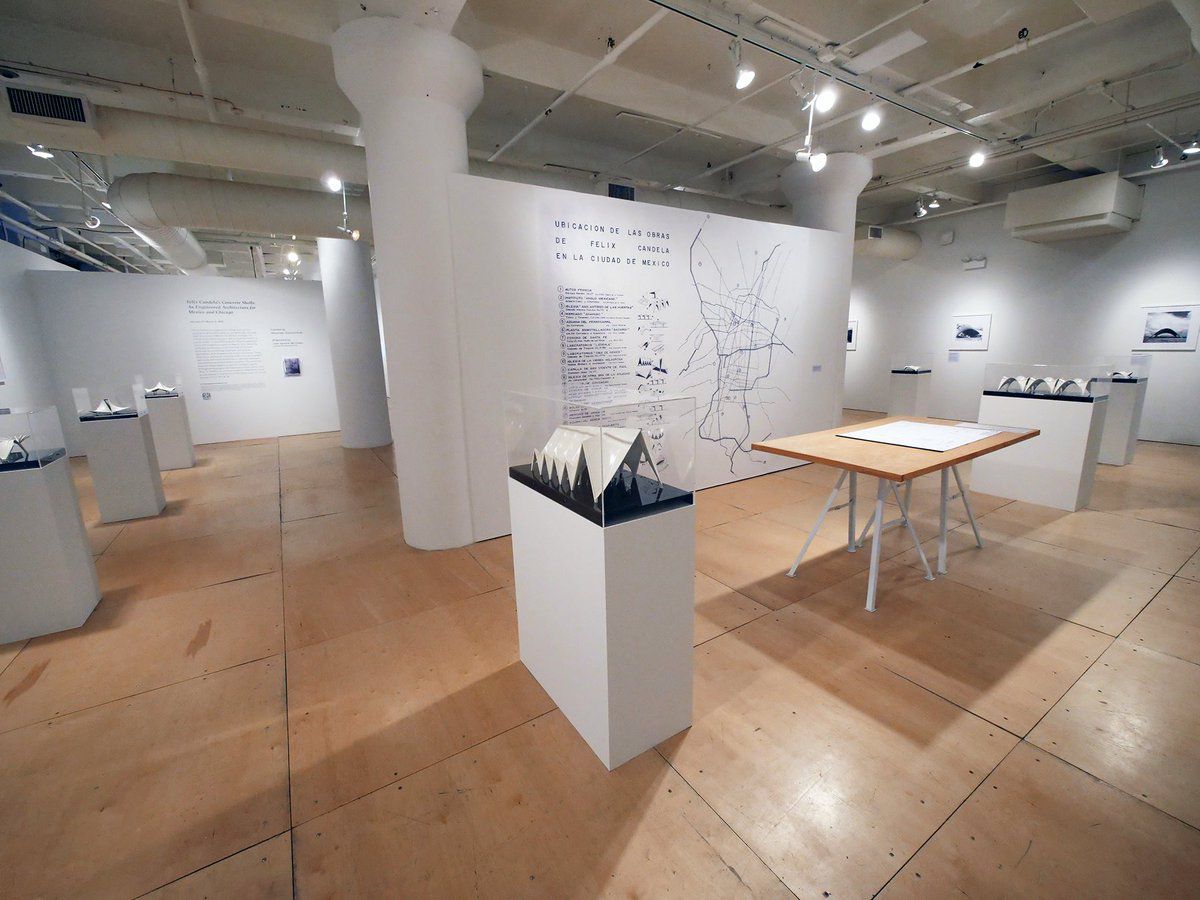 Felix Candela’s Concrete Shells: An Engineered Architecture for Mexico and Chicago at UIC

“He was an architect, engineer, and contractor in the ‘40, ‘50s, and ‘60s, which enabled him to design and work on hundreds of projects,” said Eisenschmidt. “But even being a contractor and having a financial stake didn’t make him conservative in the least. For contractors, their role in the construction process often comes with a certain level of conservatism. For Candela, it provoked the opposite.”

Born in 1910 in Madrid, Candela, an ace at geometry, was drawn to creative engineering, studying many of the latest architectural designs and early shell structures in college. In 1936, just as he was setting out to study buildings in Germany, the Spanish Civil War broke out. Candela, who served as a combat engineer for the Republican forces, gained important construction experience restoring damaged buildings. When the Republicans lost to the forces of General Franco in 1939, Candela, who by that time been captured and imprisoned in a prisoner of war camp in France, was forced to immigrate to Mexico, landing in Acapulco later that year. 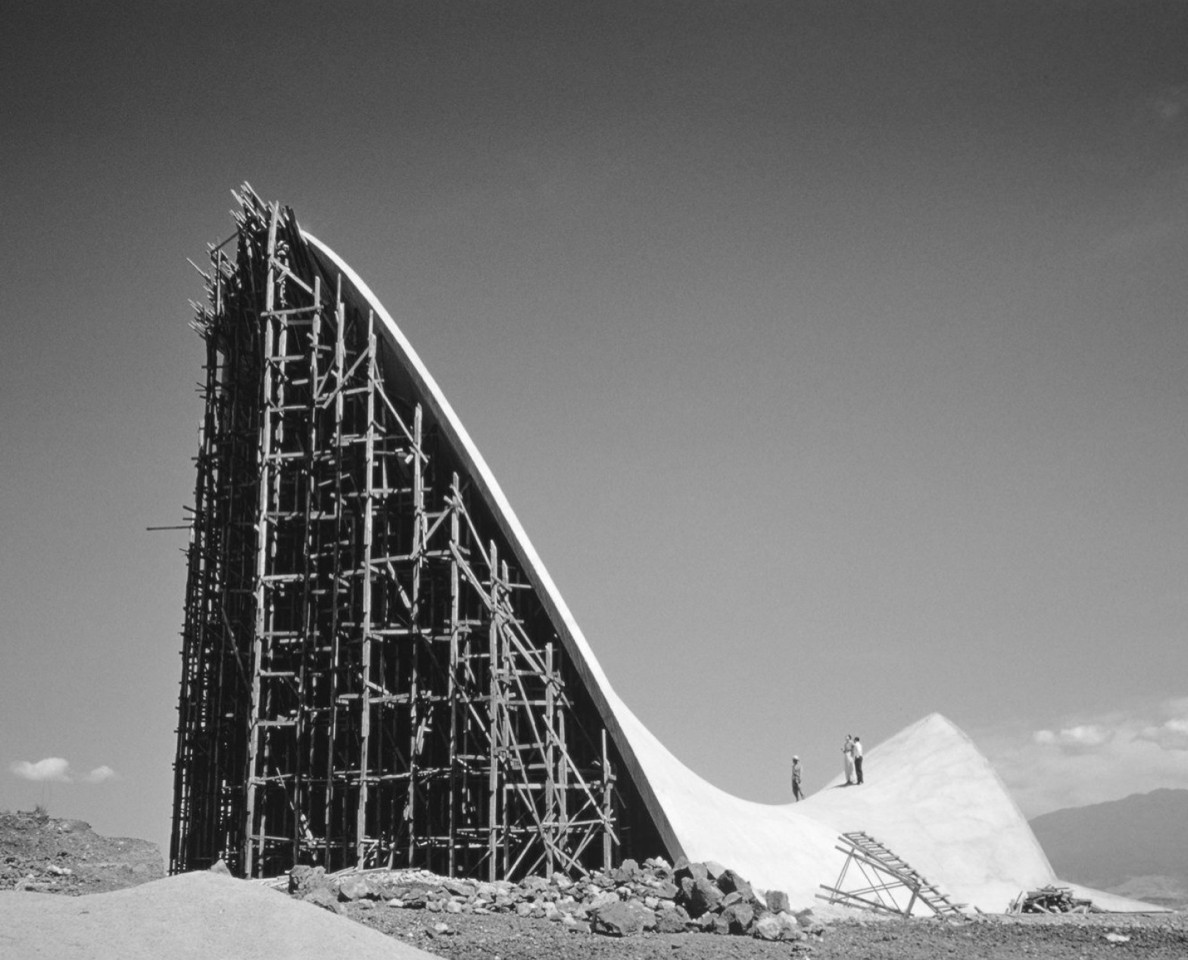 Alberto Moreno Guzmán and Antonio Candela, from the archives of FA-UNAM

While Candela quickly began his career by working on a series of residential and commercial designs, he was drawn to experiment with shell structures. He saw both artistry and cost savings in the large, sweeping curves known as hyperbolic parabaloids. Shaped somewhat like a saddle, the shapes efficiently distributed weight, requiring less material, and could be constructed using straightforward, straight-line scaffolds, a simpler method then their complex look may imply.

Candela’s obsession with shells carried over to the name of his firm Cubiertas Ala, which meant winged roof. Co-founded with architect brothers Raul and Fernando Fernandez Rangel, the company would operate from 1950 to 1976, and allowed him to follow his ambition to design thin concrete buildings with stylish roofs and large, uninterrupted collective spaces. 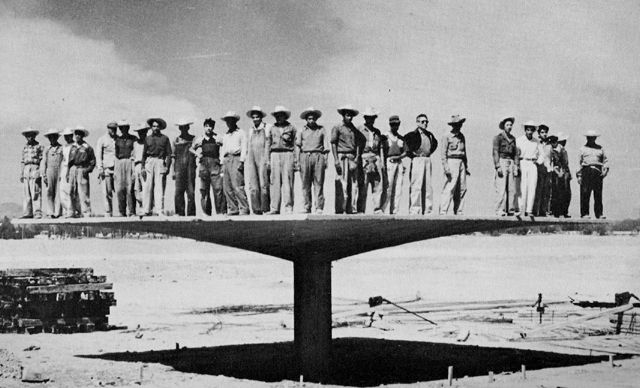 Candela began to make a name for himself nationally and internationally in 1951 with the suitably futuristic Pavilion of Cosmic Rays, a small scientific building on the campus of the National Autonomous University of Mexico. Campus scientists needed an enclosed research center with thin walls that allowed their instruments to pick up cosmic radiation. Candela, who was experimenting with concrete roofs, responded with a design for a lofted, thin-shell structure with ceilings just five-eighths of an inch thick.

When UNAM officials asked to see the calculations for such an unorthodox structure, Candela had none to show. He simply jotted down a few notes, which satisfied the administrators. Standing out like a space station on the campus, the structure still stands, today, though it’s no longer a lab, but a headquarters for the university’s chess club. 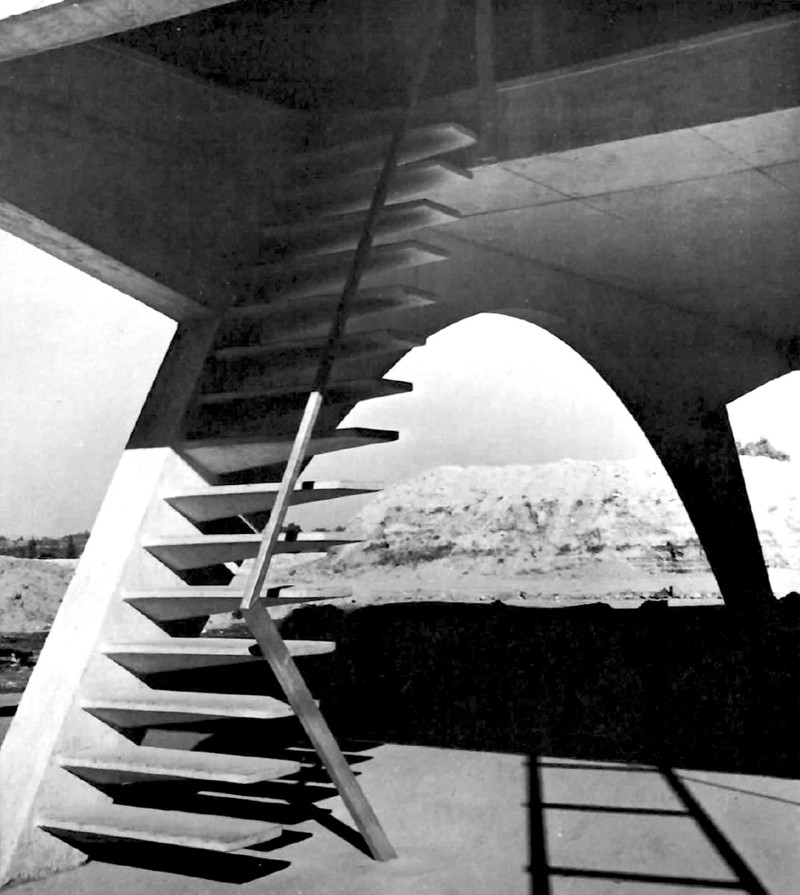 The entryway to the Pavilion of Cosmic Rays

In addition to reinforcing the suitably of thin-shell concrete structures, the Pavilion of Cosmic Rays proved Candela’s complex geometry could be constructed with simple techniques. This was a key reason for the architect’s great success in Mexico, according to Eisenschmidt. Low labor and material costs made it all the more attractive to realize his uncommon designs.

That’s not to say that every project went smoothly. According to Eisenschmidt, when workers began building scaffolding and pouring concrete for the Chapel Lomas de Cuernavaca, a bold upward sweep of concrete that soared to a height of 70 feet with walls merely one-and-a-half inches thick, workers had trouble removing the framework from the set concrete, one of the trickiest parts of the construction. The first time they attempted it, the structure collapsed. Candela supposedly told the workers not to worry, he always charged double because some of his structures fell down.

“He really understood building and architecture as a speculative process,” says Eisenschmidt.

Candela would go on to create other masterpieces in the ‘50s and ‘60s in Mexico, including Los Mantalites, which used groined vaults to create a vast, flowing interior, and the Palazzo dello Sport, a stadium featured in the 1968 Mexico City Olympic Games. 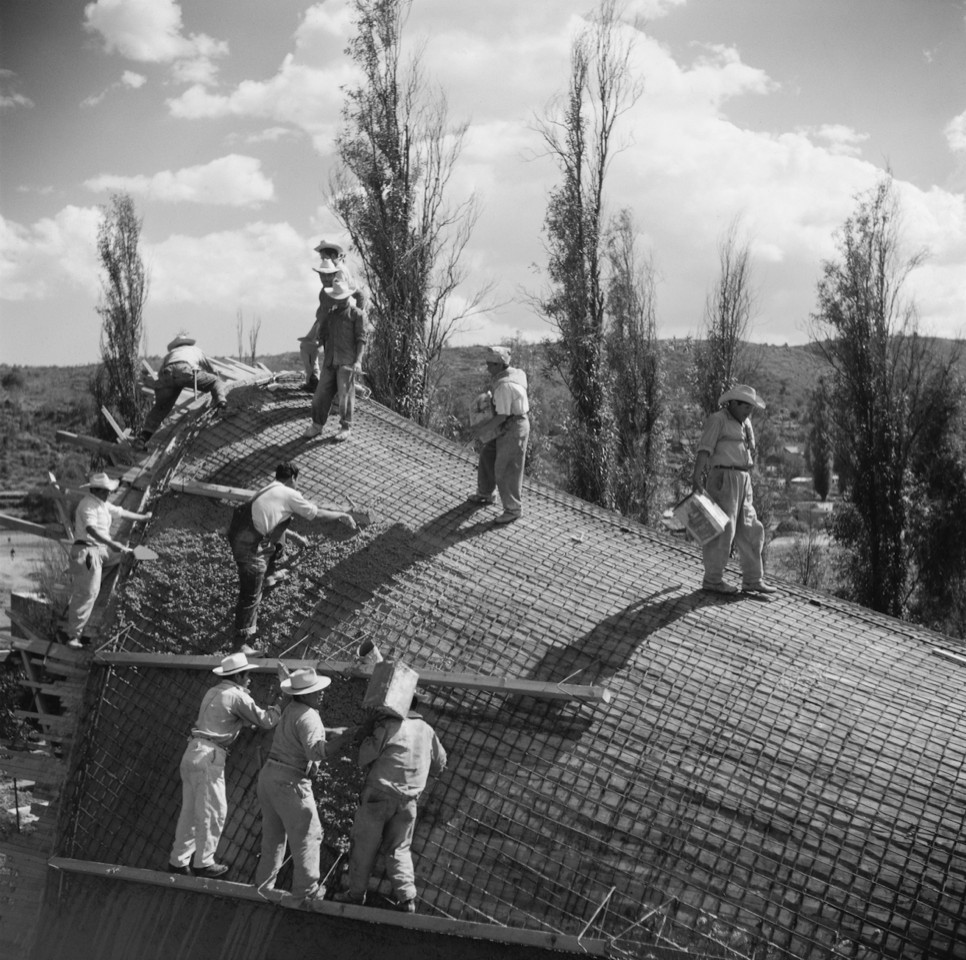 When he took a teaching position in Chicago in the ‘70s, Candela wasn’t as active as an architect, having spent decades designing hundreds of buildings. Eisenschmidt’s research found that teaching, writing, and lecturing, not surprisingly, were his focus, and while he didn’t have much physical work to show from that period, he did contribute to the city’s architectural discourse.

His work would ultimately inspire many others. Zaha Hadid Architects featured his work as part of an exhibition held at the 2012 Venice Biennale, while Santiago Calatrava, another architect who pushes the boundaries of engineering, studied with him, and ultimately collaborated with his teacher on L’Oceanogràfic, an oceanarium at the City of Arts and Sciences site in Valencia, Spain, that opened in 2003 and riffed off the undulating shape of Los Mantiales.

“The student work from that period shows the impact of his teaching on multiple generations of emerging architects and engineers,” he says.

While Candela may not be the household name of many of his peers, his work has been an inspiration to architects and structural engineers for decades. During a period where Brutalism arose and gave concrete a bold, brash reputation, Candela’s otherworldly curves offered a graceful alternative. WHY ARE SO MANY ARCHITECTS TURNING TO POLISHED CONCRETE FOR THEIR CLIENTS?

More and more people are choosing polished concrete floors. And they're loving it! THIS CONCRETE HOME COST ONLY $109K USD TO BUILD, IT IS LOCATED IN PORTUGAL